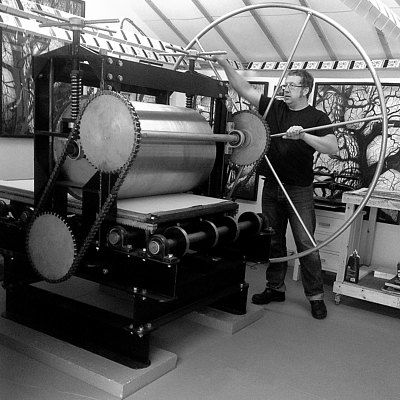 After finishing art school, like most people, Duncan had no funds to buy an expensive printing press. But having packed a job in to go to university, he wasn't about to abandon his interest in printmaking just because of a lack of equipment. The only option open was to build his own printing press, so for inspiration he looked back at the beginnings of printmaking in the west – the Gutenberg era and the people who had to invent their machines in order to be able to use them. They had to use mainly wood and although steel was available there weren't the facilities to make precision parts. However, living the modern era gave him several distinct advantages – being able to incorporate things like roller bearings and metal girders, and having things made in an engineering shop, which back in the 1500s wouldn't have been possible.

Duncan was also inspired by some of the processes used in ceramics where potters build their own kilns, taking the craft back to its elemental roots – you don't have to buy it, you can build it. Duncan's mother was a potter and as a child he helped her build kilns in their back garden, learning how you could take basic materials and make something really interesting out of them.

It took a few years to design his first press, with the help of a friendly local engineering company who were prepared to listen to what he wanted. Their advice was "design the press carefully, otherwise we will end up building your mistakes." So he had to make sure it was right. He believes building his own press has had a positive impact on his work because it's given him a deep understanding of how to make a print from the ground up, rather than just having the machine ready made, meaning you don't have to think about where it came from or understand how it works – all you do is make the print.

He now has two large presses built out of RSJ girders, and have converted several Victorian washing mangles into portable printing presses which he takes out to fairs and workshops. He also has some smaller, cast iron book presses which complement the home made presses.

Duncan's interest in printmaking is primarily relief printing and woodcut because you don't need any chemicals, meaning the process is safe and non-toxic and there's no poisonous waste to dispose of, and no need for specialist safety equipment. He employs drypoint methods as well as using chisels and drills. Duncan loves drawing but doing a single drawing can take weeks, and you only have the one piece of work at the end of it, whereas with a printing plate you can keep taking impressions.

The Old Man Of ShipleyDuncan Pass

The Casting Out Of Adam & EveDuncan Pass

You looking at my beer?Duncan Pass